This is a private webpage that provides information in support of the Schmutz Surname Project at FTDNA. Data from other such companies is included when publicly available or provided by a participant. Please address corrections and additions to her.

To me, genealogy is the study of family history and heritage across time and geography. Genealogy involves sociology, history, geology and perhaps psychology but not necessarily biology. Y DNA is bare bones biology. It provides no context or interpretation of indication of the caring relationships in families. It should therefore not be surprising that the results of genealogical studies and Y DNA studies will not always be in perfect agreement. A difference in biology does not negate our shared heritage.

The drawings below are an attempt to capture some of this information in a visual format. Some of the drawings simply shows one line of descent from an ancestor through males. That is because Y DNA can only be used for males descended from males.

Although this project began focusing only on Y DNA, it has been expanded to included autosomal DNA. The autosomal DNA test at FTDNA is called Family Finder but other companies such as Ancestry, do not use this name. Persons in the charts below that have FF followed by initials have done an autosomal DNA test. They sometimes link through a female Schmutz ancestor therefore.

The DNA data thus far suggests that the Schmutz name, with a "meaning", was adopted by more than one man. There are at least Three Schmutz families represented by DNA testing as of 2017:

I have chosen to refer to these families by a place that an ancestor lived before 1800. This does not suggest that all members of that family lived there, however.

Schmutz Settlers in the United States from Switzerland

Schmutz is a common name in Switzerland. The drawing above shows two Schmutz men who settled in Utah that descend from a Swiss ancestor. Both men match at Y DNA markers tested by the former Sorenson Molecular Genetics, and the transferred results are shown as Kit B501804. Another man with a variant spelling of Schmutz was tested in 2019, B463676. These men are considered a "close" match by FTDNA criteria but their common ancestor could be quite far back.

Based on these data, it seems that this is one very large Schmutz family that lived in the area of Bern Switzerland for centuries, even though their common ancestor has not yet been identified. It will therefore be called the Bern Schmutz Family 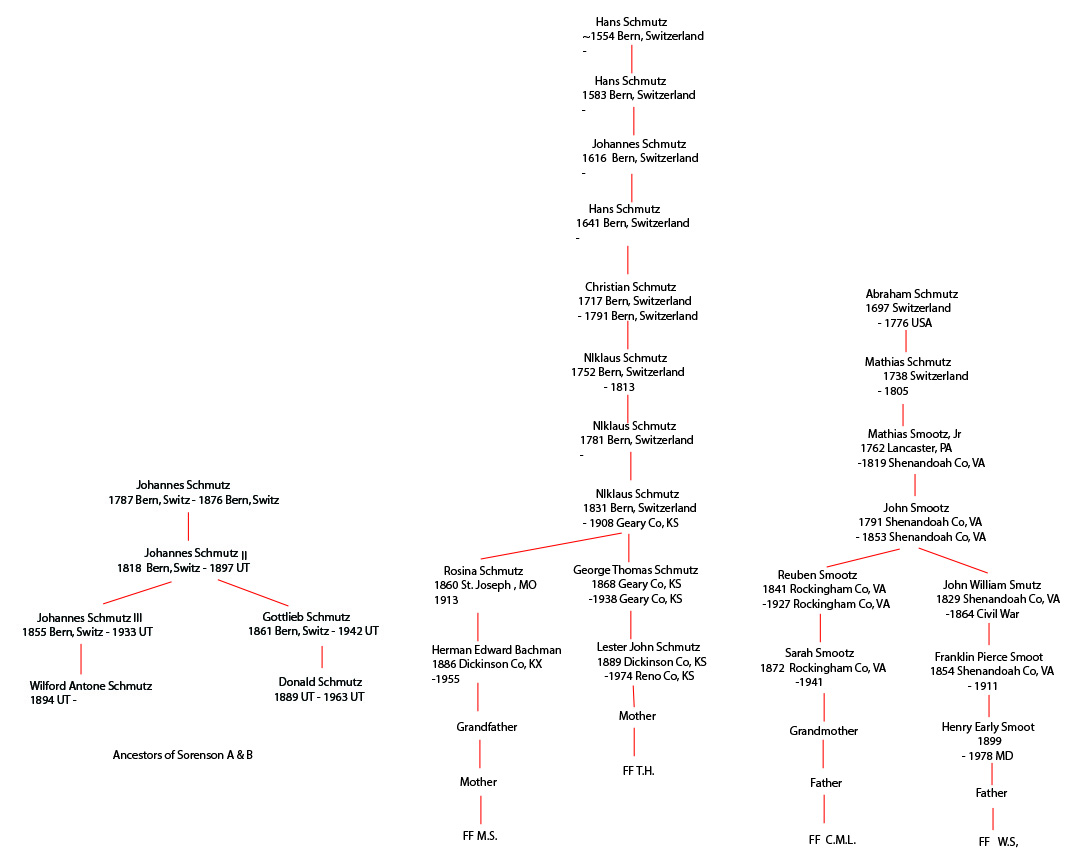 Schmutz Ancestors from Germany and France

There were other Schmutz families in Dornstadt who may or may not be related to the participant or each other. It would seem likely that at least some are related. These data on these Familienregister pages was found on FHL International Film 1053443, "Kirchenbuch, 1702-1902, Katholische Kirche Dornstadt (OA. Blaubeuren)" and were transcribed by Sheila Schmutz in May 2009.

The information in the table above is from "The World Book of Schmutzes" published by Halbert's Family Heritage in the U.S.A. in 1995, through a mail order promotion. The data are known to be incomplete but they may indicate an approximate proportional distribution of Schmutz families at that time.

A partial listing of Schmutz immigrants is on a separate page.

Links to Sites about Country of Origin

A searchable database that lists all ship passengers that left the port of Bremen, Germany between 1920 and 1939. Sadly most other records were destroyed. This database provides town or country of origin since Bremen served as a emigration point for Germans, Poles, Hungarians, etc. A genealogy database for Swiss people A website that provides tips for researching ancestors from Switzerland.

Links to Sites with Schmutz Family Genealogy Data and History

Genealogical information can be supported or confirmed by Y DNA data. However Y DNA data alone can not trace ancestry.

Links to Other Related Sites about Y DNA

This is the site to view the actual haplotype data and sign up to participate if you are not already tested and would like to be. This website allows men who have been tested to look for matches, even if they were tested with a company other than FTDNA This website allows anyone to enter 15 common markers and see if they have matches. The identity of the matches nor their email is revealed but their place of origin in shown on a map. Another Y DNA project co-hosted by National Geographic that Schmutz men could participate in, if they know their ancestor's country of origin (you can participate in more than one with the same DNA sample)

Aims and Limitations of this Webpage

In the fall of 2008, a few people interested in Schmutz family genealogy began corresponding about confirming the genealogical data many people have both individually and jointly collected, using Y DNA. I will do my best to update the page periodically, using the information posted on public websites.

Note that the names of the participants and their Fathers are not shown to protect the privacy of the individuals. If individuals do not wish their line to be shown at all, please contact me and I will respect your wishes.

FTDNA provides estimates of the average MAXIMUM distance to a common ancestor based on the number of markers that are different between two men, or alternatively on the cumulative number differences across the markers. The microsatellie markers chosen for testing by these various companies are prone to mutation and that's why they work well for studies of migration and genealogy. Microsatellite markers are runs of repeats - 12, 13, 14 CT or AG in a row, for example. Occasionally a microsatellite will not occur in an individual and this is called a null allele. It only takes a single deletion to eliminate a microsatellite and so a score of 0 is really of no greater significance than a difference of 12 and 13. Both types of mutation have been seen in Y DNA studies.

One should not expect to take these estimates of distance literally in a specific family. A mutation happens, when it happens. This can be between a father and his son, even though the estimated distance stated on the FTDNA charts is much longer than a single generation.

Participants should participate with the full knowledge that they may find out that they do not match the ancestor they expected to. This can be a heart wrenching experience. Many families have adopted children over the years and these adoptions were not openly discussed in some periods, as they are now. Giving the child the name of its adopted family was considered the norm and a sign of the strong esteem in which the child was held. Also see this excellent webpage on "paternity events".