This webpage is part of a series on Dog Coat Color Genetics. The last major update was done on March 24, 2010 by Sheila Schmutz, Ph.D. sheila.schmutz@usask.ca From about 2018-2020, many more studies have been done on merle by several groups, but I have not tried to include those here.

The merle pattern is expressed in dogs with a heterozygous genotype. One of the homozygotes is solid colored on the torso and the other is white or mostly white. Frequently these white dogs are deaf, and less commonly blind. This is an example where genes involved in pigmentation of hair or skin can also be associated with development of nerves. Most breeders have learned to avoid this problem by never breeding two merle dogs together.

If you are not sure which type of red your Dachshund is, then you could have it DNA tested for this. If the dog is e/e then it's best not to risk breeding it to a merle dog. Many DNA labs are not licensed to test for merle. The test was patented and a sole license was sold. The test has not been widely available therefore, and may continue to be unavailable.

The variety of coat color amount and pattern seen in homozygous merle dogs is extensive as shown in the color plates below. All of these Australian Shepherds but one are homozygous M/M. All are reported to be deaf and/or tested as deaf with BAER testing. In fact 27 of 29 of the Aussies we genotyped that were M/M were deaf. The one dog shown here that is M/m, could hear and was only deaf in one ear by BAER testing. After you've tried to find that exception, scroll to the bottom of this page for the answer to see if you chose correctly. It is harder than one might think! 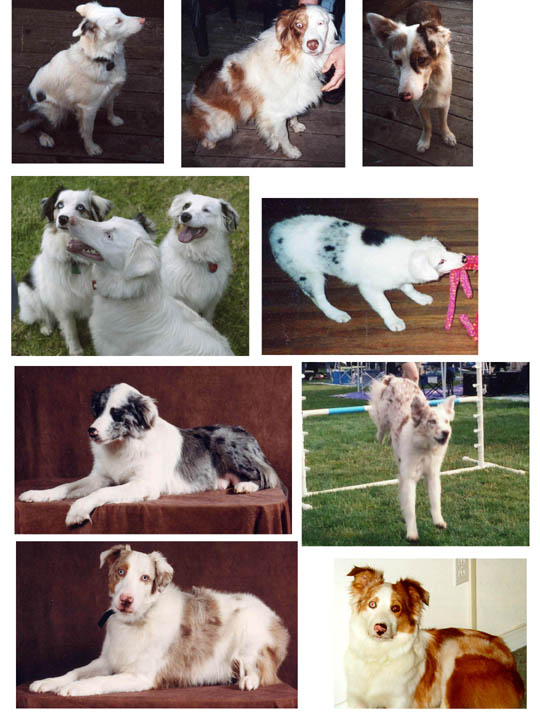 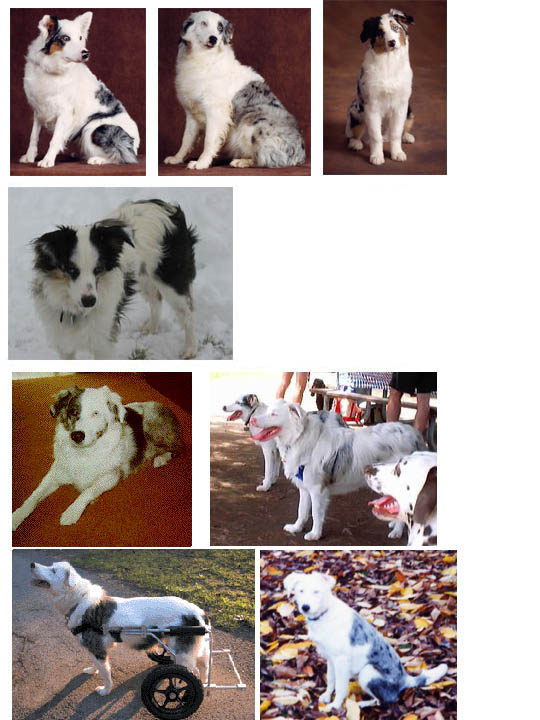 Subsequent to the study described in Aussies above, a study was conducted by George Strain and others using BAER testing and genotyping of the SILV mutation. They studied dogs of several breeds. Their study included 40 dogs that were M/M. Twenty-nine of the 40 were Catahoula, a breed with no white markings. Only 2 Catahoula were deaf in both ears and 1 was deaf in one ear. Of the remaining 11 dogs, 4 were deaf in both ears and 3 in one ear. These 11 dogs included 5 Aussies, 3 Collies, 1 Sheltie, 1 Corgi, and 1 Great Dane. Only 1 of the 113 dogs with a M/m genotype was deaf, confirming again that heterozygous merle dogs are not prone to deafness.

The large litter of Great Dane pups above, from a black dam and Harlequin sire, shows a wide range of spotting patterns. Spotting patterns could include merle which is discussed above.

In the presence of a merle allele at SILV, one copy of the H allele in PSMB7 causes Harlequin. However, two copies of the H allele cause lethality in utero in the affected pup.

ANSWER to merle "quiz": Cayene, the dog doing an agility jump is M/m whereas all others tested M/M. Note that the others lead great lives and many do agiity too!