This webpage is part of a series on Dog Coat Color Genetics. The last major update was done on October 4, 2014 by Sheila Schmutz, Ph.D. It was moved to a different server on 30 July, 2020.

The first gene that causes at least some spotting patterns in dogs was identified and published in 2007. Furthermore potential mutations causing some forms of spotting have been identified in this gene.This gene is MITF, microphthalmia associated transcription factor. MITF is a critical gene in the pigmentation pathway.

MITF has been shown to cause spotting of the piebald or random type in crossbreds by Rothschild and colleagues. It also caused the Landseer pattern in Newfoundlands. However the causative mutation was not identified in their study.

Another study presented by Karlsson on behalf of the Broad Institute and the Univerisity in Uppsala, Sweden focussed primarily on Boxers. They have shown that MITF is the gene causing the solid, flashy, and virtually white forms in Boxers and Bull Terriers. They suggest that two mutations in the promoter region of the MITF form that works in the pigmenation pathway (MITF-M) are necessary for white in these breeds. One of these is called a SINE (short interspersed nucleotide element) and the other is a string of repeated alleles that varies in length in different spotted dogs, which they call a "Length Polymorphism or LP". Their data suggest that the LP is found to be longer in breeds with white markings than in dogs with no white.

Although Clarence Little (1957) suggested that most spotting patterns other than merle and Harlequin were caused by four alleles of the S locus, this does not fit that well with new DNA studies. 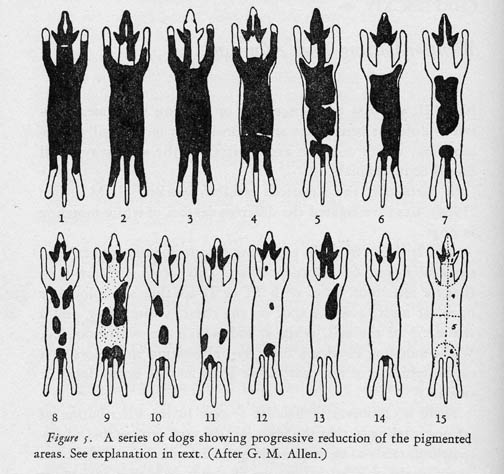 Ojvind Winge (1950) was a contemporary of Little but is rarely quoted. In his book, Winge does not attempt to assign multiple alleles to the Spotting locus but simply suggests that a recessive allele controls "white-mottling" in dogs and when it is homozygous, the dog has a considerable amount of white. When it is absent he suggests the white markings are either not present or minimal, usually on the feet, tail tip and chest. This diagram above appears in his book, but was adapted from a publication by G. M. Allen in 1914. Winge suggests that this one gene for the presenece or absence of white mottling, might explain most or all of the dogs in this diagram.

There may be other genes, besides MITF, involved in spotting, but further research is needed to determine this. Little suggested these were plus and minus modifiers. Winge is more vague about this. Pape (1990) also suggested modifiers when he postulated the genetics of white markings in Newfoundlands. Further research will be needed to determine which other genes, if any are involved.

The group from Sweden and Massachusetts has done a detailed "functional genomics" study to try to determine how various polymorphisms in the promoter region of MITF might affect the amount and placement of the white markings in dogs. They conclude that all the variation could be explained by MITF.

Little discusses the "pseudo-Irish Spotting" phenotype in the flashy Boxer and then raises the perplexing pattern he refers to as "Irish spotting", in dogs such as Basenji. He also suggests that plus and minus modifiers are likely. He says the si causes this pattern and that is is recessive to the S allele for solid, but dominant to the allele causing piebald spotting (sp). 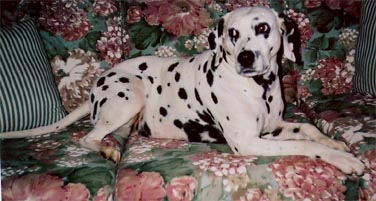 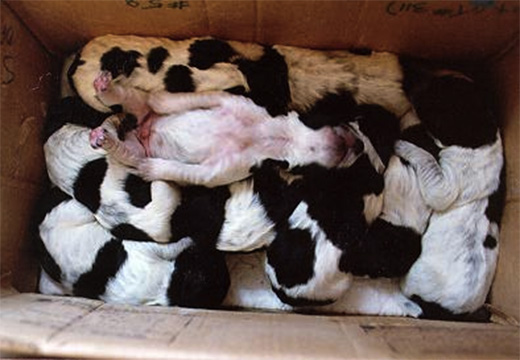 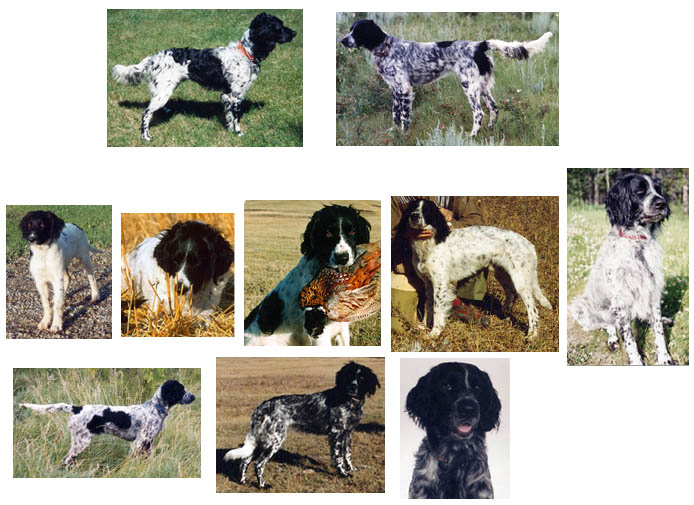 The Large Munsterlander family above shows that the amount of ticking and/or roan varies amongst the offspring in a continuous distribution. All have a few large black patches but some are much darker than others. The dam, on the top right, is slightly darker than the sire on the left. It would be difficult to categorize these dogs into only 2 discrete categories. Are 8 offspring becoming darker from left to right because of more ticking or more roan or both? Such a continuum does not lead one to think of simple single gene inheritance. However it is likely that the presence or absence of ticking may be caused by such a mechanism, and these dogs all would therefore have the allele for ticking.