This webpage is part of a series on Dog Coat Color Genetics and was last updated on July 26, 2020 by Sheila Schmutz

The B Locus in Dogs

The gene at the B locus in dogs is Tyrosinase Related Protein 1 (TYRP1). This same gene causes brown in several other species, such as mice, cattle and cats. Brown is a type of eumelanin pigment. This was one of the first genes that affected coat color in dogs, identified using DNA studies.

The nose leather, pads, and eye rims are also affected by this gene. They are black if a B allele is present but brown if not. Hence all brown dogs have a brown nose and all black dogs have a black nose but red, fawn, sable, white, etc. dogs could have either black or brown noses.

In dogs which are yellow to red (e/e at MC1r), TYRP1 mutations affect the nose and pad coloration, changing it from black to brown. Yellow lab puppies can have black or brown noses, but Vizslas always have brown or flesh colored noses. 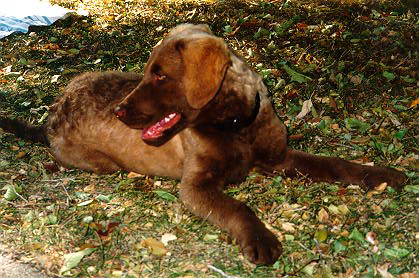 Furthermore Gabriel Palacio has found a painting by Pisanello "The Vision of St. Eustace" held by the National Gallery in London which they estimate was painted about 1440. This painting shows three dogs at the feet of the horse. A spaniel type dog behind the front leg is brown-and-tan. This is seen better if you click on "image only".

In a few breeds some dogs are called "brown" or "liver" or "chocolate" and they are not a typical brown color. Such an atypical case is called "seal" in some breeds. The genes responsible for seal are yet unknown but such seal dogs would test B/B, and also have a KB allele and at least one E allele.

I have also seen a few brindle dogs that look brown in some photos but are actually typical brindles with black and some shade of phaeomelanin striping interspersed. Again such dogs would not test as brown (i.e. b/b).

In Chinese Shar-Pei there are true brown dogs that are called chocolate and there are also dogs called brown which are not "true brown". These dogs have intermingled phaeomelanin and eumelanin hairs and have a black nose and pads.