The E Locus in Dogs

This webpage is part of a series on Dog Coat Color Genetics and was last updated on July 26, 2020 by Sheila Schmutz, PhD. It was moved to a different server.

Note that in some breeds dogs with an e/e genotype are more often cream to white than yellow to red (see webpage on white for a discussion of these breeds).

Pale red occurs rather rarely in Australian Cattle Dogs. A new mutation was found in the regulatory region of MC1R in 2018 that causes this coat color. It was only observed in this breed, although many breeds were studied. This allele was called e1 by the researchers who found it.

Another mutation that causes a premature stop codon was discovered in northern sled dogs, such as Siberian Huskies. This allele is called e3 or edel. Dogs that have two such alleles or one of these and one e are a creamy white instead of red.

The manuscript describing this was published in Journal of Heredity in Fall, 2010. A free PDF copy of the manuscript is available for download

There is another allele at the E locus, EM. Melanistic masks are rare in the hunting breeds, but are relatively common in many other breeds. The mask caused by this allele is not visible on solid colored dogs which are black, brown, or gray.

EM is the top dominant allele in this series.

The mechanism by which a black mask is formed is an interaction between the MC1R or E gene with the agouti protein and melanocyte stimulating hormone. The EM allele allows agouti to bind some of the time and cause fawn pigment to be made on the body and the melanocyte stimulating hormone to bind on the face instead. Because of this any phaeomelanin pigmented dog (i.e. yellow, fawn, red, cream) with a mask, must be so colored due to an agouti genotype. Such dogs can not be e/e at MC1R because an Em allele is required for the production of a melanistic mask. This further confirms that dogs in breeds where mask is part of the standard such as Bullmastiffs and Boxers, the reddish coat colors are due to the agouti alleles and not an e/e genotype at MC1R.

Since the mask is inherited as a dominant trait, a dog could be heterozygous or homozygous for mask. The extent of the mask or depth of color do not seem to be affected by the number of copies of Em. Melanin pigment can be black, grey or brown and therefore the term "melanistic" mask includes all these types of masks.

In some breeds all dogs have a mask. This is called "fixed" in genetic lingo since the trait is fixed and never varies. "Variable" in the table below means some individuals in the breed have a mask and others do not.

The figure below shows the MC1R peptides in the dog with the mutations discussed above that occur within the gene shown (Schmutz, unpublished). 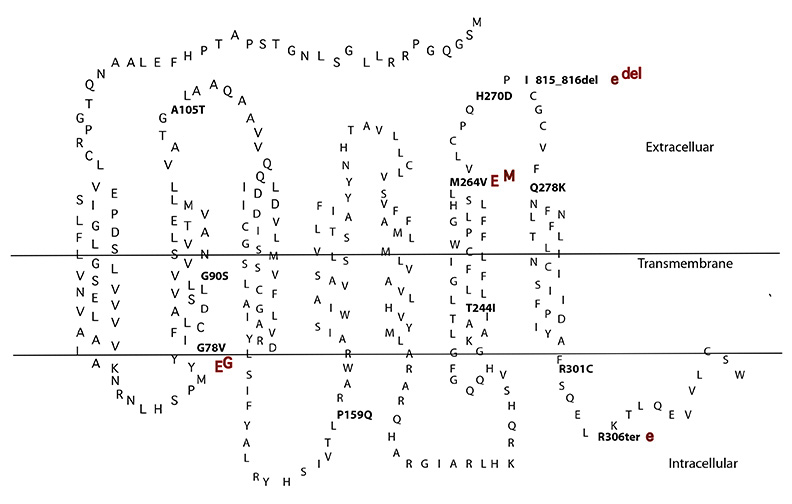 Yet another MC1R alelle was discovered by Rob Loechel in English Cocker Spaniels. This mutation causes a "zobel sable" coat color.