This webpage is part of a series on Dog Coat Color Genetics and was last updated on 28 July 2020 by Sheila Schmutz, when it was moved to a different server.

Please note that the photos on this webpage are from dogs that were actually genotyped using DNA and therefore are verified to have the alleles that they are shown to represent.

Dilution of Eumelanin and/or Phaeomelanin Caused by MLPH Mutations

Blue or charcoal grey, as a dilution of black, was shown to be caused by the melanophilin gene (MLPH). The blue caused by this gene could be termed "born blue" since it is present from birth. The Blue Doberman is a dog that has the area on its upper torso diluted to slate grey, instead of black, and its tan undersides diluted to a paler shade of tan. The dilution of the tan is much less noticeable than the dilution of black, both both eumelanin and phaeomelanin are affected in dogs of d/d genotype.

There are now at least three mutations in the MLPH gene that cause dilute coat colors in various breeds: c-22G>A (in noncoding exon 1), c.705G>C, c.106C>T (in exon 2). Not all laborations test for all mutations. One could call these d1. d2, d3. Any two of these mutations in a dog would typically lead to a dilute coat color.

Some blue dogs appear to be more prone to skin problems and hair loss, and perhaps skin allergies than dogs that are black. Some breeds have more problems in "born blue" dogs than others. Thus far, it's not clear why.

The hair loss and skin problems which occurs in blue dogs is called "Black Hair Follicular Dysplasia" in some breeds and "Color Dilution Alopecia" in other breeds. In the past it may sometimes have been called "Blue Dog Syndrome" also.

HealthGene offers tests for the common "d" allele. In some breeds such as Large Munsterlanders, Newfoundlands, and Great Danes, this appears to be the only allele causing grey/blue. In other breeds such as Doberman Pinschers, Italian Greyhounds, Chow Chows and Shar-Pei the test could detect carriers of this allele also, but this is not the only allele that causes grey/blue.

"Blue" Used for other Color Phenotypes

In other breeds, such as the English Setter, a blue belton means the dog is black and white giving a bluish appearance from a distance. In the case of the "blue belton", no dilution is involved. That phenotype is an affect of the roan, ticking and/or spotting series. Blue in the Blue Heeler is likely a description for roan. (See spotting page for other examples.) Blue merle is the term used for merle dogs with black and grey and white hairs in the marbled or merle pattern as illustrated by Peggy, the "Aussie" above. (See merle page for further information.) 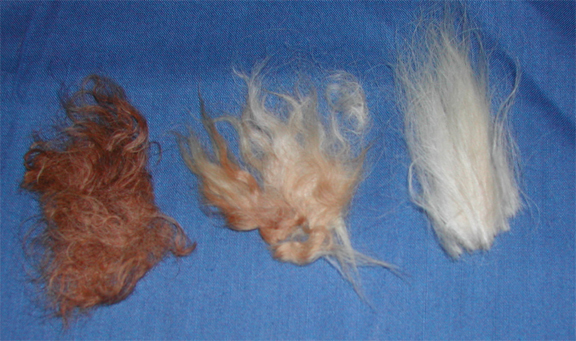 The photo above dramatically illustrates the effect of a co-dominant phaeomelanin diluter gene. The hair clippings are from Toy poodle ears: red, apricot, and cream. Their dam was a black that was not diluted to silver, although she was not pitch black either. She must carry some dilution allele to have a cream pup.

Little (1957) described graying as a progressive change resulting in a lightening of the hair coat as the dog ages. He suggested that this could be a dilution gene but it is not like the Weimaraner dilution gene, which causes pups to be born a diluted color and remain so. The gene that causes this in dogs, has not yet been discovered. Little (1957) reported that the G allele associated with greying is dominant.

The gene that causes progessive graying has not yet been determined, as of 2020. 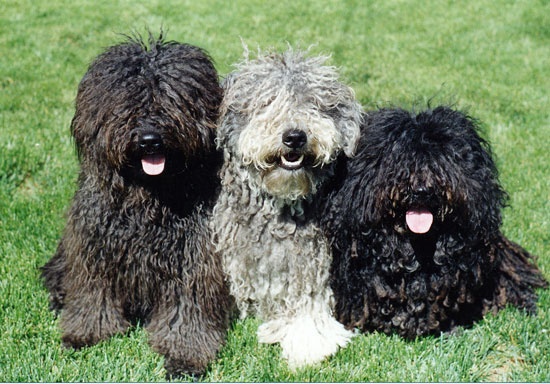 Linda Hall took the photos of some of her grey Puli over the years and has shared them. The photo above illustrates that Puli have "progressive greying". These dogs were all born black. She refers to them as "graying", "silver" and "black". Not all the Puli continue to go to the pale silver color. Some stay a darker grey.

Progressive graying also occurs in horses and that trait was recently mapped to horse chromosome 25, considered the equivalent of human 9q. The gene has not yet been found.

Little discusses another hypothetical C allele, (cch). He uses this allele to explain both a pale brown and a pale red, which would imply it could dilute both eumelanin and phaeomelanin. He further states that phaeomelanin will be diluted before and more than eumelanin. In most species, both eumelanin and phaeomelanin are affected if TYR is mutated. However, MATP (now called SLC45A2) in horses has been shown to be a gene that affects the dilution of phaeomelanin and eumelanin differently by researchers in Davis, CA and in France. MATP mutations cause the "palomino/bucksin" colors in the horse. We have recently shown that this gene does not seem to cause dilutions to cream in several breeds of dogs. However, SLC45A2 is the gene associated with albinism in dogs, and thus is the "C" locus.

Some authors refer to brown as a dilute color. Somehow this bothers me. I don't think of brown as diluted black, which to me is gray or in dog terms "blue". Brown is created by a modification of eumelanin, so in some sense I suppose I can understand why it is sometimes lumped with the diluter gene effects.

The gene for brown is TYRP1 and the 3 mutations causing brown are now known but this is discussed on another page about brown in this series.

Other Dilution Genes - Not Yet Identified

In several other species, more than one dilution gene has been identified. One of these is thought to be Tyrosinase Related Protein 2 (TRYP2). In mice, this gene dilutes black coat color to slaty grey and another name for the gene is therefore "slaty". Yet another name, based on it chemical composition, is DCT or Dopachrome tautomerase. This gene has been mapped to dog chromosome 22. In mice this DCT gene acts as a co-dominant I am unaware of a breed of dogs that has black, charcoal and pale grey so this gene may have no variants affecting coat color in dogs.