This webpage is part of a series on Dog Coat Color Genetics and was last updated on July 27, 2020 by Sheila Schmutz, Ph.D., when it was moved to a different server.

Little postulated that an allele AS causes solid or self-colored dogs. Such dogs could be the red Chow or some red Basenji. Later authors, such as Willis (1989) and Sponenberg (2001) have for some reason begun to call this AS allele "dominant black". Kerns et al. (2003, 2005) have shown that this "dominant black" is not caused by an agouti allele using DNA studies. "Dominant black", by their definition is a genotype that is epistatic to fawn, sable, etc. agouti phenotypes, but occurs at another locus, K (for blacK). Several dog breeders have suspected this for some time. The K locus is located on an entirely different chromosome than the agouti locus. Dr. Sophile Candille has studied the alleles in this series, and has been joined by Dr. Christopher Kaelin in this effort. The Stanford group decided to refer to the three alleles as KB, kbr, and ky as of April, 2007.

is a critical allele in the formation of black pigment in at least 50 breeds such as the Great Dane, Greyhound, Whippet, etc. In many breeds, KB is fixed, meaning all dogs have only this allele. In some hunting breeds, such as the Labrador Retriever, all dogs are homozygous for KB. In such breeds, the E locus alone then determines whether the dog is black or red. In other hunting breeds such as the German Shorthaired Pointer, the German Wirehaired Pointer, etc. the KB/KB genotype is fixed and the B locus determines whether they are black or brown. Although Little originally thought A caused solid black, we suggest the KB allele is actually the allele causing this type of black. In this case, "solid" does not mean that no white markings occur. A few people call this "self black".

In order to find this "new" gene K, it was necessary to recruit a large number of dogs. Great Danes, Boxers and Afghans were especially useful but one Akita and one Greyhound were also extremely important in identifying the mutation.

The gene is a beta-defensin. This family of genes has been known to play an important role in immunity in humans, mice and other animals previously. However, this was the first time that a defensin gene has been shown to affect pigmentation though.

Knowing if your black, brown or blue dog is homozygous black may be helpful to breeders for other reasons too. Although all Weimaraners are meant to be KB/KB, occasionally a litter contains a couple pups that have pale tan leg markings. This immediately means that both solid colored parents must be KB/ky, but what of the other pups in the litter? They could be tested to determine which are KB/KB (Noa Safra, Pers. Comm.). This situation has arisen in some other breeds too, such as Wirehaired Pointing Griffons.

A Great Dane breeder who is looking for the right stud dog for her Harlequin bitch and prefers a mate that is homozygous black would find this test helpful. Conversely an Afghan breeder who may be hoping the beautiful black stud dog being considered is not homozygous black, since a variety of coat color in the litter improves pup choice and sales.

All of the following dog breeds are black, brown or grey because of KB and could be tested for homozygosity. Both the brindle mutation and the ky allele are recessive to KB. Distinguishing these two recessive alleles with a "simple" DNA test is not yet possible since the brindle mutation is a complex mutation.

Occasionally one hears of two fawn or reddish dogs having brindle pups. This is possible if one is of e/e genotype (the brindle carrier), and the other has at least one E or Em allele. Afghan Hounds are one breed where this situation can arise. French Bulldogs are another breed where this situation arises. In the photo of the family below, LeRoy, on the left, is the fawn sire (e/e) and Ember is the fawn masked dam ( Em/e), of the 3 pups shown in a row below them. LeRoy is a hidden carrier of brindle which then shows in the phenotype of the 2 pups that inherited Ember's Em allele. 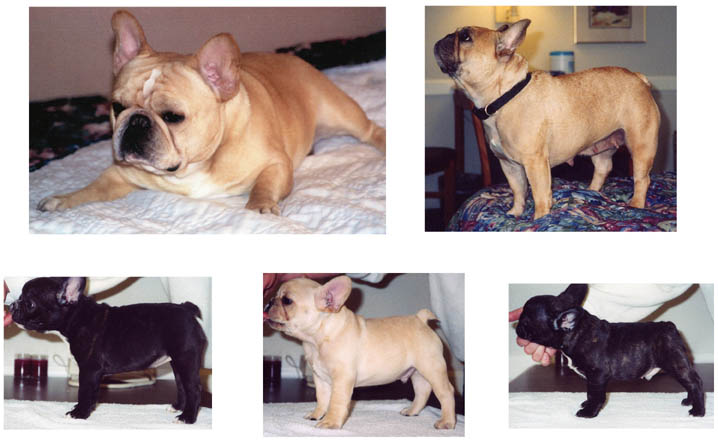 Whereas it seems that all Great Danes have only E and Em alleles at MC1R and therefore in this breed there are no hidden brindle carriers.

The Brindle phenotype can be modified by the dilution genes so that the melanistic stripes could be grey, as occurs frequently in Greyhounds and Whippets. This type of grey is caused by the D locus or melanophilin gene. It is also possible that certain shades of brown are not distinguishable as stripes on dark fawn dogs.

In some breeds the dogs are called red brindle or black brindle. The proportion of blackish stripes to reddish stripes varies among individuals, as illustrated by Whippets Ripley and Colors in the first row below, and Inkie, Joey, and Torch in the group photo. We are not yet certain if this is random or under genetic control.

The brindle Corgis Goldhawk, PQ, and Lookin also illustrate variation in the amount of black striping.

Occasionally a brindle dog darkens with age as shown by Duncan, the Cairn Terrier. 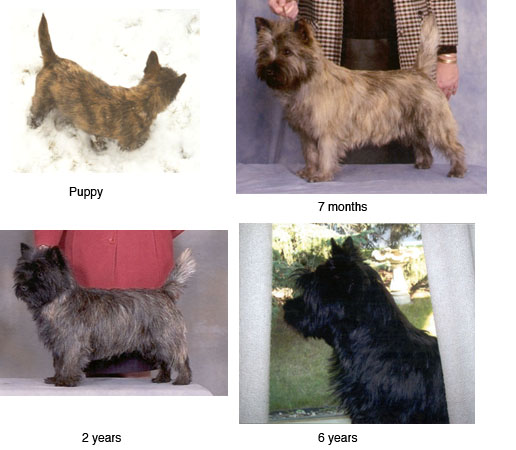 The Stanford group chose to name this allele ky since it allows yellow or phaeomelanin pigment to show. Where it shows depends on the alleles at the agouti locus.