This webpage is part of a series on Dog Coat Color Genetics and was last updated on August 27, 2021 by Sheila Schmutz.

Recent studies show that the agouti signal peptide (ASIP) competes with melanocyte stimulating hormone (alpha MSH), which produces eumelanin pigments, to bind on the melanocortin 1 receptor and must sometimes win. Both the E allele and Em allele are responsive to agouti or melanocortin binding in dogs. However dogs that are e/e have a mutation in MC1R and produce only phaeomelanin. In such dogs, the agouti genotype doesn't affect their coat color, which will be some shade of cream, yellow or red.

The tricolor collie pup and Dachsbracke above are examples of dogs that are black-and-tan with white.

The promoter study of 2021 calls dogs of these phenotypes "Black back (BB)". They suggest it is the most recessive of the phenotypes, other than full black.

Willis seems to suggest another similar allele as for saddle tan. He would use this allele to describe the Dachsbracke or a Beagle, rather than black-and-tan. A study in our lab, presented at the conference on Advances in Canine and Feline Genomics and Inherited Disease in Baltimore, MD from Sept. 23-25, 2010, indicated that all saddle tan dogs have an at/at or at/a genotype. Saddle tan appears to be a modification of the black-and-tan phenotype caused by interaction of other genes with ASIP. We had reported a mutation in the RALY gene might be the cause.

Bannasch et al.'s promoter study of 2021 calls this phenotype "Black saddle (BS)". They report that dogs with just a saddle have the VP1 promoter instead of the VP2 promoter, as the dogs with a more extensive black back do. They say that they found dogs that didn't fit the mutation in RALY causing these different phenotypes.

Most often the tan is located in specific body regions or points and called "tan point" as in the pup above left. Occasionally an interaction with another gene disrupts the location of the tan and gives tan patches that are more randomly located, as in its merle littermate on the right.

Bannasch et al. 2021, did not include such dogs in their study. They state that this exon 4 mutation causes a "loss-of-function" in the ASIP gene and suggest that it is the causative mutation for this type of black in dogs. 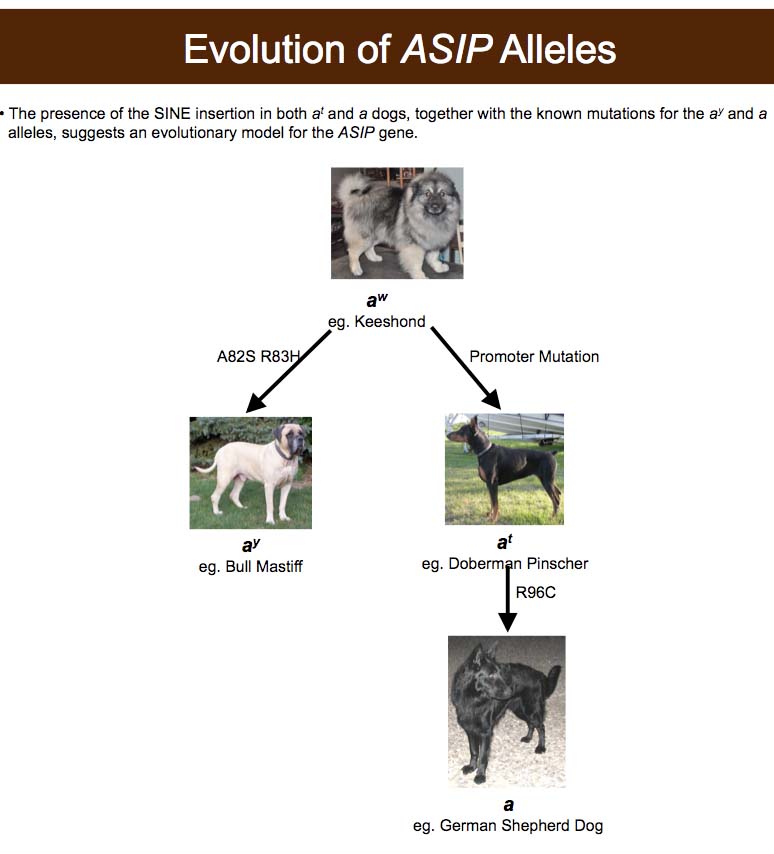 In 2020, Dreger et al. published that some dogs (45/679) had more than two alleles of the ASIP gene, in other words, more than one allele per chromosome. These data were based on large genotyping panel data, rather than the more typical analyses conducted by most DNA testing laboratories. The color phenotype of most dogs used in this study were not available, but some dogs had phenotypes that were not expected from their genotypes when more than two alleles were present.