Search billions of records on Ancestry.com

This web page was first mounted on April 13, 2011 by Sheila Schmutz. sheila.schmutz@usask.ca and last updated on July 23, 2020 when it was moved to a different server.. Any additions or corrections are welcome!

Although François-Xavier Letendre dit Batoche made a great impact on the history of Saskatchewan by founding Batoche. The early years of his life are discussed elsewhere in some detail. This webpage focuses on his Métis family from 1891 on, when they left Batoche. This webpage contains the data about this homestead and this family that I have found thus far. However, I am also trying to reconstruct more of their story, between the gaps in the data.

The 1891 census taken on April 7, 1891 shows them still living in Batoche, then in the census district of Duck Lake. His wife, born Marguerite Parenteau, is listed with him as are 7 of their children. Five of their children had already died by 1891. Their oldest daughter, Helene had already married Charles Eugene Boucher and had two young children: William and Emilie. The Boucher family lived either with them, or next dor.

Letendre reported his profession in 1891 as Retail Dealer and Eugene Boucher reported his as Clerk, General Store. One assumes that he was a clerk in the store in Batoche, owned by his father-in-law. Boucher was elected to the Legislative Assembly of the North-West Territories in 1891, which met in Regina, so had considerable influence in his own right.

The homestead patent application for SW 16-41-28-W2 in file 4049585 states that the Letendre family "commenced residence" on this quarter which became known as their ranch, on May 1, 1891. This was just a few weeks after the census. Helene and her husband and chidren did not move with them, but had moved to St. Louis by 1901. Letendre did not sell the famous Batoche house to the RCMP until 1895. Was it leased to them from 1891 to 1895, or did Helene and Boucher stay and run the store until 1895? Likely the later. By 1898, the store was rented by George and William Grant of Duck Lake.d.

This ranch quarter was clearly the second homestead claim made by Francois Xavier Letendre. "Pre-emptions were abolished in 1890, but those who had settled before 1881 retained this right." (p. 228)d The second quarter was free and the pre-emption charges were waived if the settler had a first entry before 1889. Xavier Letendre fit into this category and therefore he was eligible to apply for the ranch quarter in 1891. Apparently about 16 Metis were eligible for a second free quarter.

Although the application says that Xavier Letendre lived on the ranch "continously", I presume this was meant loosely. In keeping with a merchant who had trading outposts in Fort a la Corne, Stony Creek, Frog Lake, and Fishing Lakes and teams of salesmen who visited outlying Cree communitiesd. He apparently visited Winnipeg and Montreal to see his suppliersd. He probably travelled during this later period of his life also.

Letendre also travelled for political reasons during this time. In February 1889 he went to Ottawa to present a petition to Sir John A. Macdonanald asking for scrip, homesteads, consolidation of Metis in electoral districts, etc. Although this petition was evaded, eventually 240 acre homesteads or scrip were granted to Metis children in 1899-1900.f

The important events such as marriages and funerals, and likely also baptisms of grandchildren continued to take place in Batoche at St. Antoine de Padoue Church, even after the family moved to the ranch. Their daughter Elise Letendre married Henri Fisher on September 14, 1892 in Batoche. They settled on a ranch near Nut Lake, Saskatchewan according to the 1901 census. They had several children.

Did Letendre choose this spot on a large lake and then apply for a homestead or were they randomly assigned this quarter? Why did he and Marguerite leave their home in Batoche in 1891 with their children? 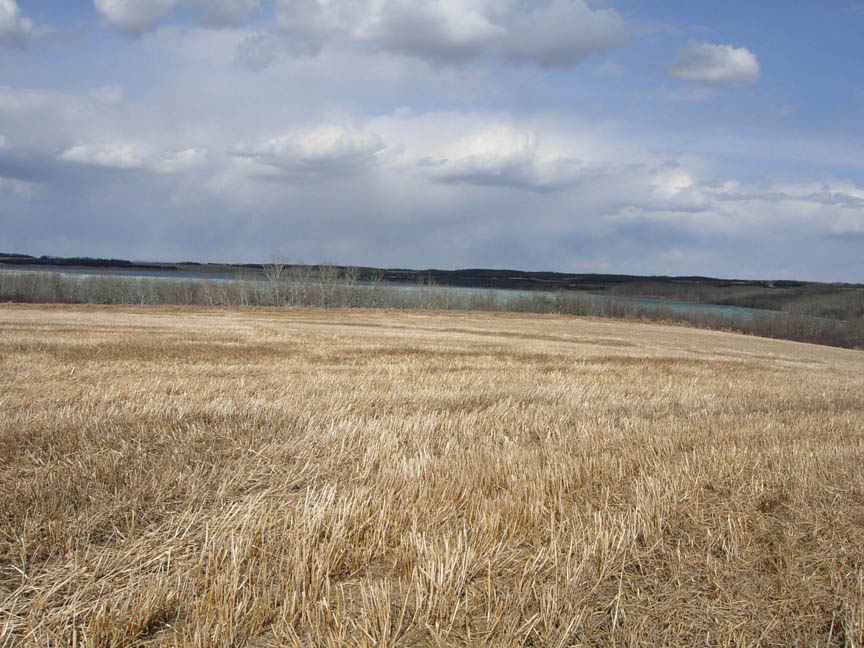 The log frame house they lived in on the ranch was 20 X 25'. I presume the second set of dimensions, 18 X 20', was the second story or a later addition. The cost of the house, $2000, was very high at the time. Most Ukrainian immigrants who settled there ten or so years later were listing house costs of $200 to $400. Hence, I suspect that the Letendre house was built for the family and the value includes both materials and labor. Was this house aslo built by the Gareau brothers who had built the grand house they had in Batoche?

Unfortunately the home burnt in the 1920s and so there is no trace of it now.

Although the Dunafoldvar school was built about 1.5 miles northeast of the Letendre in 1908, their youngest child Azarie was born in 1885 so would be an adult by then. It is possible that their grandchildren William and Flora may have attended this school.

Their sons went to St. Boniface Colleged and two of their daughters went to a St. Ann's boarding school in Prince Albertd.

Note that the closest French speaking settlers were along the South Saskatchewan river in the Fish Creek settlement. However that was at least 9 miles to the northwest of the Letendre ranch. This distance was likely too far to allow many visits there.

Florestine Letendre married Louis "Bruno" Venne on September 4, 1894 in St. Antoine de Padoue Church in Batochec. They had 3 children: Louis, Evangeline, Alice. He died November 11, 1900 in the area near Wakaw, SK of a ruptured appendixc. Florestine died in 1901, presumably one of the 3 daughters that died of tuberculosisb. Their children were apparently raised by their unmarried aunt and uncle Elmire Venne and David Venne on the original Venne Ranch, also known as the Spring Valley Ranch in the RM of Fish Creek, SK. The Centennial Map also shows that the "Venne Store and Shopping Place" operated from 1898 to 1911 on SW 28-42-27-W2.

Jean Baptiste Letendre was a teacher at the Fish Creek school in the 1890sd. Jean Baptiste married Rosalie Dumont June 2, 1897 in the St. Antoine de Padoue Church in Batochec. They were recorded directly after the late Francois Xavier's family in the 1901 census. This suggests they were living nearby, or even on the same piece of land. They had two children, William Letendre born on April 9, 1898 and Flora Letendre born on April 2, 1900. Rosalie must have died by 1906 based on her absence in the census of that year. The two children are living on the ranch with their grandmother Marguerite and their uncles Emmanuel and Azarie. In the 1911 census Jean is working on the railroad under a contract to Robert Garrett and Sam Boyer and living with a cook and several other workers on 42-27-W2 in the RM of Fish Creek. His son William John Letendre enlisted on Februrary 19, 1918 and listed his grandmother Marguerite as his next-of-kine. Did he die in the war?

Note that the Jean-Baptiste Letendre and Azarie Letendre who served in WW1 were cousins, gradnsons of Louis Letendre. g

Josephine Letendre married Albert Pilon on August 1, 1899 in St. Antoine de Padoue Church in Batochec. They had a son Wilfred on May 9, 1900. She died about 1902 in the RM of Fish Creek, SK not far from her parent's ranch.

Azarie, apparently actually Joseph Azarie Letendre, was still at home for the census taken on July 10, 1906. He married Rose Elmire Parenteau on October 25, 1906 in Batoche, SK. In 1908 Azarie Letendre began a homestead on NW 7-42-27-W2, about 5 miles northeast of his mother's ranch. So presumably they lived with Marguerite at first. In January 1908 their first daughter, Lucy was born. In June 1909, Flory was born. He died on March 4, 1909 i. The 1911 census refers to his wife as a widow. (Note the photo, reported of him and Azarie and Jean Baptiste Letendre, before they left to serve in World War I in 1914 in Diane Payment's book

Emmanuel Letendre was still with his widowed mother Marguerite in the 1916 census. The quarter was not patented until 1919. The 1920 Cummins map shows A. Latender (spelling?) on this quarter. The 1922 and 1926 maps show Mrs. A. Letender. Is this the widow of Azarie or is this Marguerite?

A fire destroyed the house on the ranch in the 1920sd. Diane Payment implies that Emmanuel was involved with this fire. Emmanuel died in the 1950s in Alvena, Saskatchewan where he was then living in the hotel d. He never married.

The 1930 Cummins map shows I. Yuzak. Members of that family were still shown on this quarter on the 1994 RM map.

Application for a Homestead Entry was signed on 29 June 1891 in Prince Albert by Francois Xavier Letendre of Batoche. (his mark)

(although one would think this is St. Isidore-de-Bellevue NE of Batoche, it is actually much closer to Alvena, where their homestead quarter was based on all the neighbor's name and the map of homesteaders)

(note that I have not found Marguerite yet in 1911, but Jean is here:)

Census records of the family of Elmire Rose Parenteau, the widow of Joseph Azarie Letendre who died in 1911.

Census records of the family of Elise Letendre, the wife of Henri Fisher.

Census records of the children of the Florestine Letendre, wife of the late Louis "Bruno" Venne

Publications Related to the Letendre Family

Links to Sites Related to the Letendre or Parenteau Families

Links to Sites with Genealogical Information

Back to Alvena, Saskatchewan Genealogy and Homestead History