This web page was first mounted on March 3, 2011 by Sheila Schmutz. sheila.schmutz@usask.ca and last updated on June 14, 2021. Any additions or corrections are welcome!

Legal Land Description is a series of compass directions and numbers. A typical land description, still in use today is: Quarter by direction, section - towship - range - direction meridian. The town of Alvena is at SE 18-41-1-W3. This is located in the SE corner of the section 12. All townships are numbered in consecutive order from 1 in the SE corner to 36 in the NE corner. Even numbered sections were allocated to homesteaders by quarters. The 11th and 29 section in each township were allocated for schools. The 8th section and all but the NE quarter of the 26th section were allocated to the Hudson's Bay Company and the remaining odd numbered sections were allocated to a Canadian Railroad Company. In this area, that would be the Canadian Pacific Railway, or CPR for use in building railroad lines in some cases, but more typically for later sale to finance the building of rail lines. Some records of CPR land sales were available. (http://ww2.glenbow.org/search/archivesCPRSearch.aspx)

One of the first persons to purchase land allocated to the railroad was Augustus Meredith Nanton of Winnipeg. He was a stock broker there. According to the Centennial Map of the R.M. of Fish Creek, he had purchased Section 17-41-1-23 in 1902. He was no longer the owner by 1920 according to the Cummins Map. Augustus Nanton also bought several sections in the RM of Aberdeen, just west of this one. He was clearly a land speculator.

Canadian Census records are available free of charge at Library and Archives Canada. Ancestry.com has also indexed these records by name and purchased the right to sell subscriptions for those indexes and other genealogical records. Many public libraries, including the Saskatoon Public Library, have international subscriptions to Ancestry.com which can be used free of charge.

If you know the legal land description of the homestead, from family or from a search of the Homestead records, that is a great help. Another way is finding it on an early map. The photo below shows the SE corner of the Centennial Homestead Map of the RM of Fish Creek, for example.

The 1906 census records are most pertinent to the homestead settlers of this area. Each two page section of the census is a separate webpage. Let's say we are looking for homesteads in the area just east of Alvena, in Section 20. The page with some of the homesteaders in this section happens to be page. 20-21. How would we figure that out? The 1916 Canada Cenus page has a downloadable pdf file of Census Districts and Sub-districts
[XLS 231 KB] Downloadable Formats.

One finds that Alvena is in the Humboldt District, for Canada Census enumeration. This was district 18 in 1916 but district 13 in 1906! 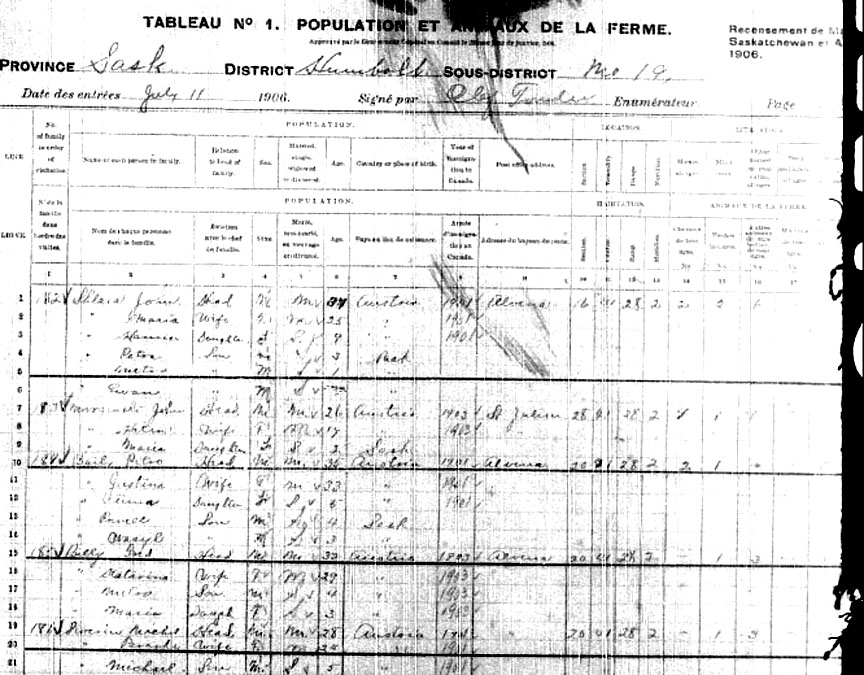 So having opened page 20-21, let's say we are interested in the homesteaders on NW 20-41-28-W2. This land is adjacent to a "correction line" so actually the NW would be only an 80 acre piece, not a full 160 acre quarter, so that quarter runs 1 mile long and only 1/4 mile wide instead of the typical 1/2 X 1/2 mile square. If you examine the faint image above carefully, you notice that Baily, Petro and Billy, Fred have most of that land description listed as their LOCATION. These two homesteaders were listed with PLACE OF BIRTH as Austria. Well, that's probably because the Ukraine was part of the Austro-Hungarian Empire in 1901 when Peter or Petro Billy or Bylj left, and in 1903 when his brother Fred left. The head of the third family is Nikola Sawaryn who homesteaded SE 20-41-28-W2.

This brings up other issues - handwriting and the spelling of names. The census takers typically had reasonably good penmanship. However, not all of them spelled perfectly. Many had difficulty spelling names that were of a different ethnic origin than their own. Therefore the index of names at Ancestry.com is not necessarily going to show the name of your ancestor as you expect it to be spelled. After a time, many immigrants anglacized their names or others did this and so from census to census, the spelling could be different. Petro or Peter were used for the first name of this homesteader. In his homestead file there are papers showing his name as:

The census records show him as:

The son of Fred Bilyj, who died 1 Jan 1907, was called Metro in the 1906 census, which might have been a nickname. He was later called Dmytro which was spelled several ways. He filed for the patent on this original homestead 18 Oct 1921, after finally turning 21 and obtaining the paperwork necessary to file as the personal representative of his late father.

The first names of their wives and children, along with their gender, marital status, age, and country or place of birth are also shown on the 1906 census. The last 5 columns, show their livestock as numbers of horses, milk cows, beef cows, sheep, and hogs. More information about the Canada Census records available can be found through the Canada Genealogy Centre website.

From 1922-1923 the Reeve for the RM of Fish Creek was Jurko Bilyk. He could be related to the men above, and the spelling of their name had changed again, but perhaps not. His quarter was NE 25-42-28-W2, near Zacharko Bilyk and Metro Bilak's. Jurko may have been later anglicized to George.

Cummins Maps were made from 1917 to 1930 for Saskatchewan and Manitoba, every few years. Copies are available in the Saskatchewan Archives. The photo above is a portion of map 217 on the left and 216 on the right, from 1920. We see that Peter Bily is no longer on the West portion of Section 20 of Township 41, and that his wife Mrs. K Bilj is shown as the resident of the NE quarter, because her husband Fred had died by then.

Note that the location for Alvena indicated the post office at the time, not the present day village of Alvena. 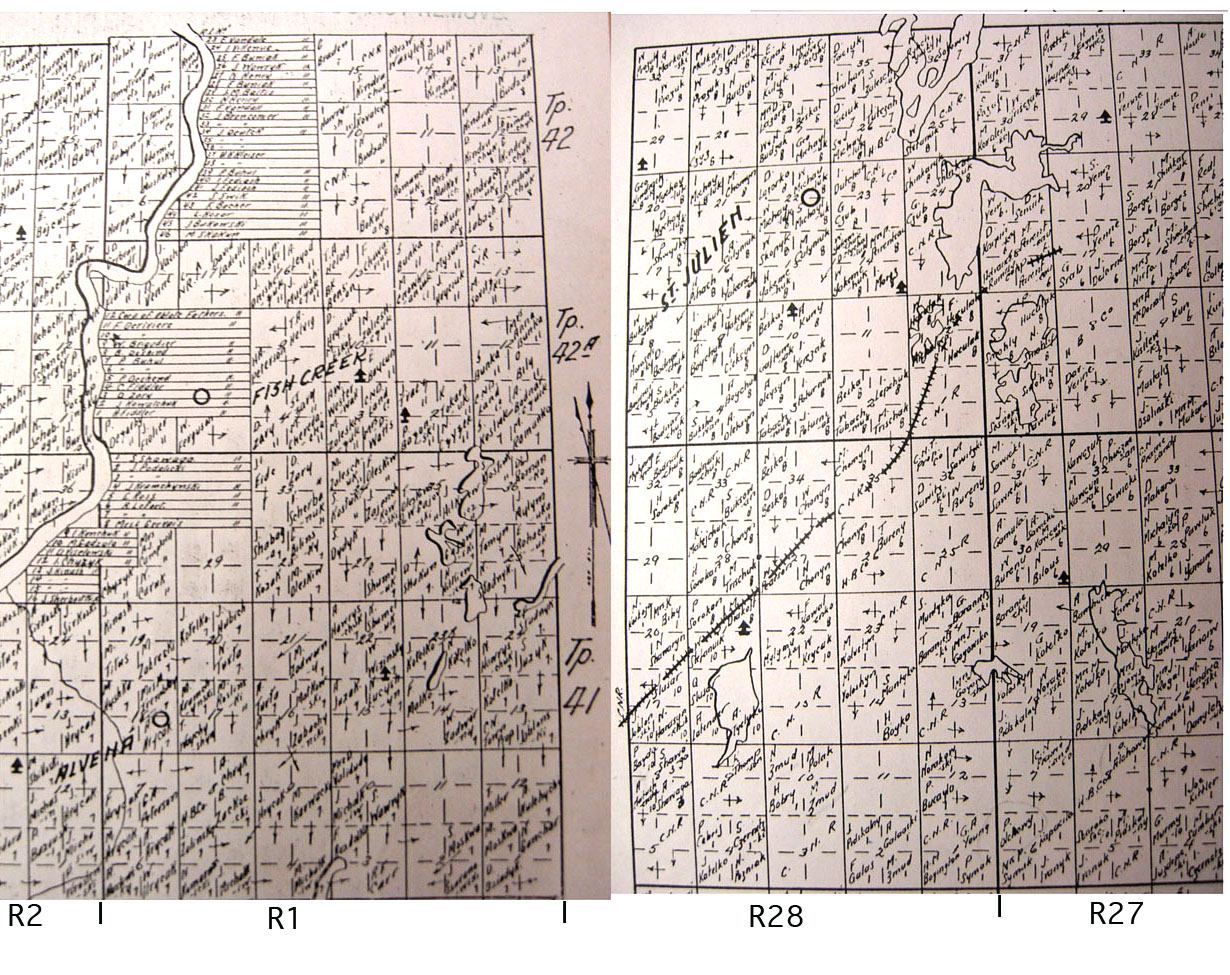 Maps using the same system of the early Dominion Land Survey, prior to homesteading, are still in use today. The map above is the SW corner of the 1994 map from the RM of Fish Creek. It shows the landowners at that time. I have removed the names from Section 20 of Township 41 to more clearly indicate it. That 160 acres along the west edge was the homestead quarter of Peter Bily, discussed above as an example homesteader who immigrated to Saskatchewan from the Ukraine.

In the upper left hand corner of this portion of the map (Section 31 & 32), note that the land was subdivided into long narrow pieces, 80 - 160 acres each. This was often done along rivers so that more settlers had river access. It was typical of the Métis river lot system that occured prior to the Dominion Land Survey in many areas. This is also sometimes called the Seigneurial system of New France. Several of these settlers are indicated as Cree FB (Cree French Breed) in the 1901 census and were found as neighboring younger men in St. Francois Xavier, Marquette, MB. There were several Fidler brothers, sons of William Fidler: Norbert, Cuthbert, Xavier, James, William and their mother Marguerite. Nearby are the brothers Pierre and Calixte Tourond, owning quarters along the coulee where the "Battle of Fish Creek" occurred in April 24, 1885. The four Métis settlers who died in this battle were Francois Boyer, Michel Desjarlais, Pierre Parenteau Jr. and Joseph Vermette.

Further north on the river, was the homestead river lot of Gabriel Dumont who lead the Métis in this battle and subsequently ran a ferry across the river.

A few miles northeast of Alvena, François-Xavier Letendre dit "Batoche" who a wealthy merchant and the founder of the town of Batoche, claimed quarter SW 16-41-28-W2 in 1891. He set up a very large ranch with 200 cattle and 30 horses. He moved to this land with his family in 1895. He died in 1901 of tuberculosis and influenza, as did at least one of his daughters, Marie. His widow Marguerite Letendre, nee Parenteu remained there with some of their other children. Emmanuel Letendre was still with her in the 1916 census. The quarter was not patented until 1919. Based on the Cummins Map of 1930, the Letendre family had left by then.

Although many last names of the Ukrainian and Polishe landowners are different in 1994 (se map below), many are the same as those listed as founding members of the two parish churches. Notice Yuzak, Hnatiw, Sikorski, Stadnyk, Zarry, and Dziadyk for example. The Métis settlers are sadly no longer there. 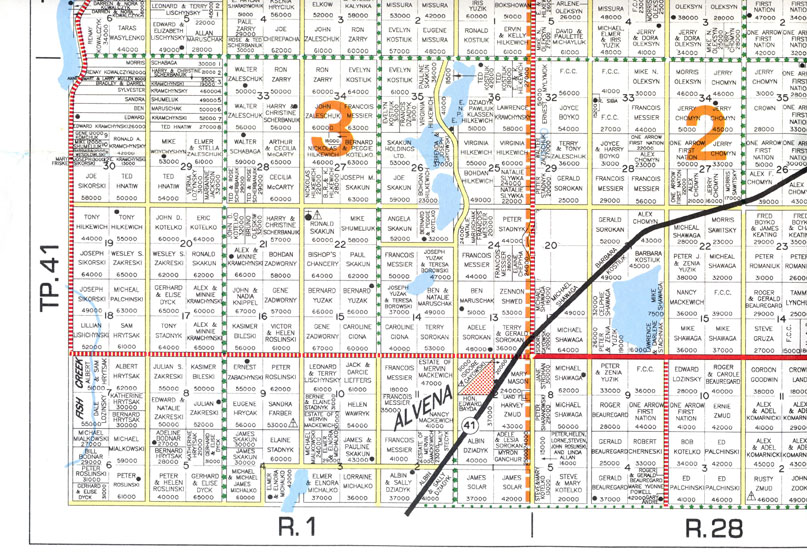 Thanks for your interest!

Back to Alvena Homestead History Homepage