This web page was first mounted on March 3, 2011 by Sheila Schmutz. sheila.schmutz@usask.ca and last updated on November 1, 2021. Any additions or corrections are welcome!

Note that some sections below are on separate webpages to aid download speed.

The Honorable Ed Tchorzewski apparently gave a speech at the Alvena Homecoming on July 27, 1980 and in Memories- Alvena District, a book prepared in relation to this event, he states that a large group of homesteaders came in June, 1898. He further states that they were the second large group of Ukrainian settlers in Saskatchewan and became known as the Fish Creek Colony. Many had signed up to go to Manitoba or Edmonton where relatives had already settled and were surprised to hear they were instead going to Fish Creek R.M. However, most stayed. In mid-June of that year a killing frost hit and destroyed the gardens that they had planted.

Alvena has been in the Rural Municipality of Fish Creek, No. 402 since before it was formed on February 28, 1913. The administrative office of this R.M. is in Wakaw. Prior to the R.M.'s establishment there was a Local Improvement District which was formed on July 15, 1907. Alvena did not become a village until 1936.

The map below shows the Rural Municipalities in District 5. The names of the RMs adjacent to the RM of Fish Creek have been added.

There was also a place known as Alvena Farms (22-41-1-W3) which does not exist now, except for the Church of the Assumption of the Blessed Virgin Mary. I am not sure if there ever was more there than this church. Anyone with information about this, please email me. 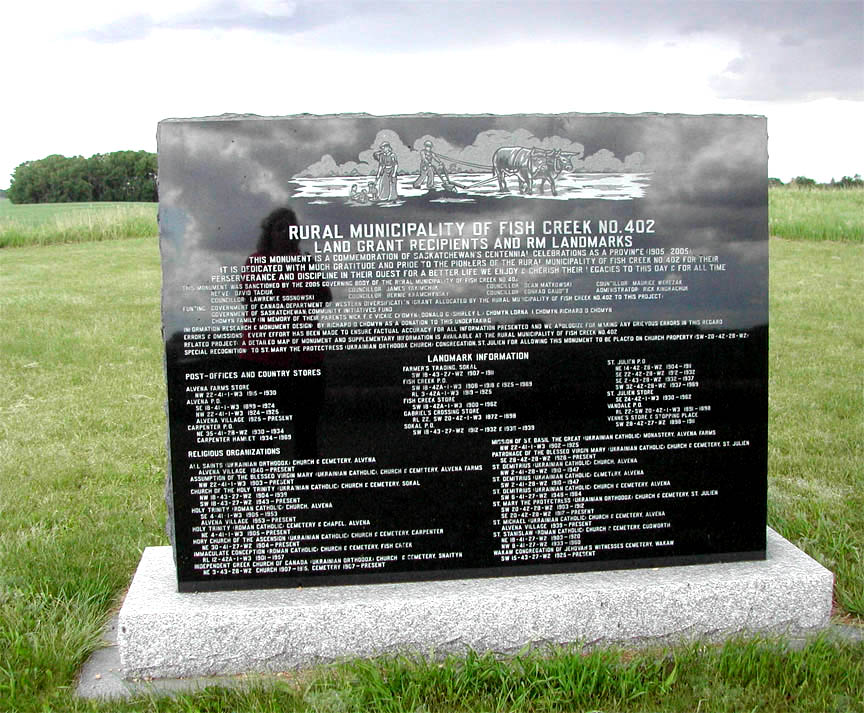 A commemorative memorial to the early settlers of Fish Creek is located one mile south of Hwy 312 on the "correction line road" near the St. Julien church.

The Saskatchewan One Room School Project lists several one room schoolhouses in the region (shown on the map at the left).

These and later schools are shown on the map at the left, adapted from "Memories - Alvena District" (1980).

The first store in the RM was owned and operated by Joe Brunoniar in Fish Creek, beginning in 1900 (Hawrish 1967).

The original license for the Gabriel Ferry which traversed the South Saskatchewan River and connected to the Carlton Trail was obtained by Gabriel Dumont in 1877. He ran it intermittently until 1883. In 1908 the ferry was licesned to the village of Rosthern. The Saskatchewan Government took over the ferry in 1912. This location is now on Hwy 312.

Publications Related to Early Settlement of the Alvena Area

Links to Sites Related to the Alvena Area

Links to Sites with Genealogical Information

Thanks for your interest!